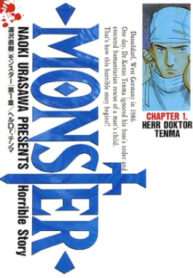 Monster (stylized as 🢒M⊙NS†ER🢐) is a Japanese manga series written and illustrated by Naoki Urasawa. It was published by Shogakukan in their Big Comic Original magazine between 1994 and 2001, with the chapters collected in eighteen tankōbon volumes. The story revolves around Kenzo Tenma, a Japanese surgeon living in Düsseldorf, Germany whose life enters turmoil after getting himself involved with Johan Liebert, one of his former patients, who is revealed to be a dangerous serial killer.