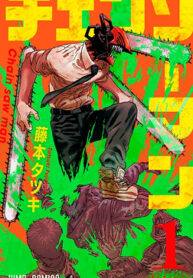 Chainsaw Man (Japanese: チェンソーマン, Hepburn: Chensō Man) is a Japanese manga series written and illustrated by Tatsuki Fujimoto. Its first part was serialized in Shueisha’s shōnen manga magazine Weekly Shōnen Jump from December 2018 to December 2020; its second part began serialization in Shueisha’s Shōnen Jump+ online magazine in July 2022. Its chapters have been collected in eleven tankōbon volumes as of March 2021.

Chainsaw Man follows the story of Denji, an impoverished young man who after making a contract with a dog-like devil named Pochita, he fuses with Denji, granting him the ability to transform parts of his body into chainsaws. Denji eventually joins the Public Safety Devil Hunters, a government agency focused on fighting against devils whenever they become a threat to the world.

In North America, the manga is licensed in English by Viz Media, for both print and digital release, and it is also published by Shueisha on the Manga Plus online platform. An anime television series adaptation produced by MAPPA is set to premiere in 2022.

As of June 2022, the manga had over 13 million copies in circulation. In 2021, it won the 66th Shogakukan Manga Award in the shōnen category, as well as the Harvey Awards in the Best Manga category. Chainsaw Man has been overall well received by critics, who have commended its storytelling and characters, and have particularly highlighted its violent scenes within the context of the story.